EDURNE PASABAN, ADVENTURER OF THE YEAR 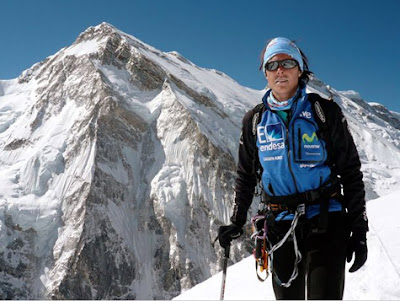 Recently National Geographic, one of the largest and most renowned educational institutions and nonprofit scientific world, has named Edurne Pasaban the Adventurer of the Year 2010.
The award, a prestigious and recognized worldwide, is decided by the National Geographic website. Edurne was nominated along with nine other prominent people in climbing, navigation, exploration, etc. More than 9000 people around the world continue to Edurne on your facebook page. They have been instrumental in the election, as acknowledged by the mountaineer.
In May 2010, 37 year old Spanish mountaineer Edurne Pasaban finished her nine-year quest to climb the world’s 14 tallest mountains, the 8,000-meter (or higher) peaks. As she said: “You climb to the top and live to tell about it or you don’t. And descends can be more fatal than the push to the summit”. And Edurne knows this too well. Six years ago, on her way off of 28,251 foot K2, Pasabán lost pieces of her big toes to frostbite. When she returned home to Spain she felt like a load of things had piled up on me all at once. She was 31 with no partner, no children, and a life dedicated to a quest that had left her missing some of her toes. She had trouble getting out of bed in the morning. She thought about quitting climbing. Then, not quite a year later, Pasaban returned to the mountains, where things were clearer. And last spring, after knocking off 26,545 foot Annapurna and then, 26,289 foot Shishapangma, the alpinist became the first (she is sick of the debate with Eun-Sun’s claim) woman in history to summit every mountain above 8,000 meters. 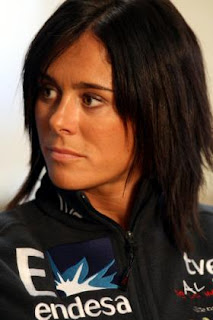 “If people decided that I am the Adventurer of the Year, I am very happy, you know it,” Pasaban said when she was surprised with the news last week in New York City’s Central Park. “In my life, I never thought I would climb the 8,000-meter peaks. And I never thought I would be the Adventurer of the Year. It’s a nice present, and I would like to tell everybody thank you very much.”
Raised in the mountainous Basque country of northern Spain and standing six feet tall, Pasaban starting climbing when she was 14 years old. By 18, she was climbing in the Himalaya. Pasaban’s mountaineering accomplishments have made her a national hero in Spain. Though Pasaban does not think of her climbing in terms of being a woman, she realizes her impact: “I did not set out to prove anything, but if I can be a reference to help women believe in themselves, I will be very content with that”, she says.
Congratulations Edurne! You deserve it! 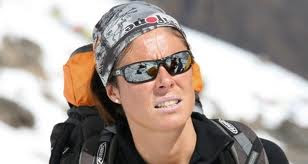