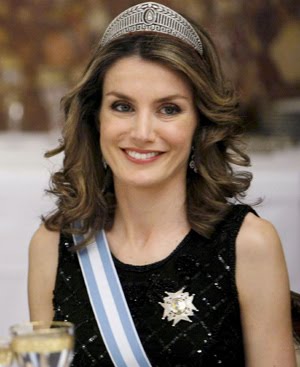 For many reasons one of the most popular members of the Spanish Royal Family is Princess Letizia and today this post is about her.
The princess of Asturias, Letizia Ortiz Rocasolano, was born on the 15th September 1972 at Oviedo, to a family with close ties to the mass media. The eldest daughter of a journalist and a nurse, her parents divorced in 1999 and her father remarried a fellow journalist. She had two sisters, though the youngest of them died in 2007. She also was married in 1998, for one year, having no children.
She has worked from a very young age in several media, as for television, she has worked at several channels, as a newscaster, editor and reporter. She reported from Washington the presidential elections, in September she broadcasted live from Ground Zero following the 9/11 attacks in New York and in 2003 she filed reports from Iraq following the war. In 2002 she sent several reports from Galicia, in northern Spain following the ecological disaster when the oil tanker Prestige sank.
And when she was anchoring a TV news programme in November 2003, the Royal Household announced Letizia’s engagement to the Prince of Asturias, to the surprise of many because nobody knew of the relationship of Prince Felipe and because she was divorced.
Six months after the announcement, the wedding took place on 22 May 2004 in the Cathedral Santa Maria la Real de la Almudena in Madrid. Afterwards the royal couple had two children, so far, Leonor (2005) and Sofia (2007). And if the reform that the administration is planning takes place, Leonor will be queen by the logic of times. 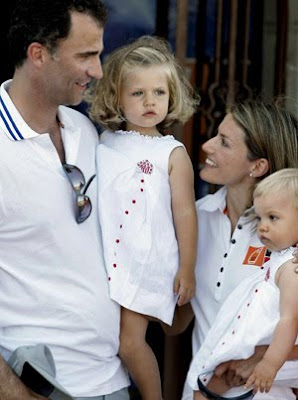 Letizia joined from the beginning the duties of her husband and she seems to be doing a good job as a princess. And although, from time to time, some people tell on the press that she has got some food problem (anorexia) she always tells that it is not true at all, that simply she eats a lot but she doesn’t put on weight. Officially her height is 1,68 cm (5' 6'') and she weights 50 kg (110 lb). She is also considered one of the most stylish women in Spain. 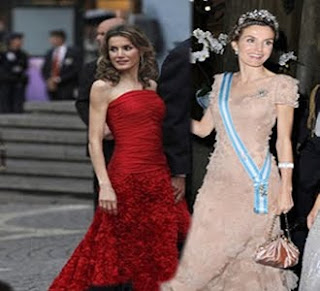