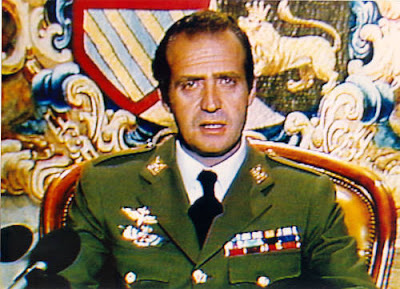 30 years ago today a mustachioed Lieut Col Antonio Tejero, proudly wearing the uniform and a shiny tricorne hat of the Guardia Civil, burst into the main chamber of the Spanish parliament brandishing a gun. Thus began what Spaniards refer to as 23-F, the attempted coup of February 23rd, 1981.
Tejero was the frontman of a military-led operation against Spains’s fledgling democracy. General Franco, the last of Europe’s prewar dictators, had died fiave and a half years earlier, still in power and the parliamentary monarchy that the new King Juan Carlos I had established was far from solid.
The death of Franco elevated Don Juan Carlos de Borbón to the throne. Until Franco’s death Juan Carlos had remained in the background and eemed to follow the dictator’s plans of appointing him his successor as head of state and later King of spain. Once in power as king, Juan Carlos facilitated the development of the current political system, as his father Don Juan de Borbón, had advocated since 1946.
So, the so called Spanish transtition was the era when Spain moved from the dictatorship of Francisco Franco to a liberal democratic state. And the transition began with Franco’s death. Nevertheless, the transition proved challenging, as the spectre of the Civil War (1936-1939) still haunted Spain.
And this coup attempt proved to be later as a defining moment in introducing democracy to Spain and at the same time, everybody agree that the role played by King Juan Carlos that long night was just crucial for the democracy in this country.
Here you can see a video of King Juan Carlos speech when at dawn he lead to the country to support the democracy process and this speech eventually led to the failure of the coup:
Published by Nieves