THE PRESTIGIOUS CHEF SANTI SANTAMARIA HAS DIED IN SINGAPORE 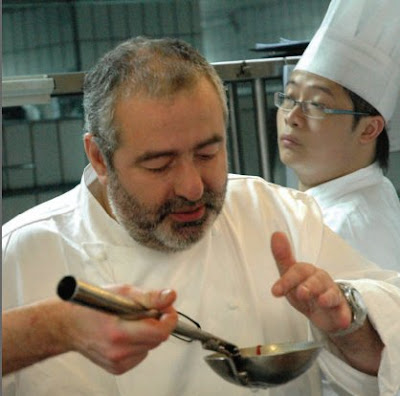 The prestigious chef Santi Santamaria has died of a heart attack in Singapore. He was the first Catalan chef to achieve three Michelin stars and won the National Prize of Gastronomy in 2009, he was  totally against the use of chemicals in the kitchen.
Santamaria was born in 1957 in Sant Celoni (Barcelona), where he opened the restaurant "El Raco de Can Fabes" in 1981, together with his wife. At the time of his death he was presenting his new restaurant, Santi Restaurant, to the international press, when he suddenly collapsed. He had developed its business in the East recently.
He was a great defender of traditional cuisine and gastronomy in favor of keeping away from the chemical elements popularized in the new cuisine and challenged haute cuisine to inform their customers of the ingredients used, because he believed that ingredients and methods used were in detrimental to the quality and nature of the products. He said: "If it comes to having imaginary experiences, this is already achieved on drugs". It was truly a brave man defending his ideas regardless of fashion.
Santamaria had a blog about cooking (Santi Santamaria Blog). The last recipe was shared on February 4th and explained how to prepare the hake with pig nose and ears. I enclose below his first opened restaurant Can Fabes website (he had five more restaurants all over the world), to have a look at clicking on the link:
Can Fabes Restaurant website
Juan Mari Arzak, another great chef and great friend of him, said he was stunned and did not have words to express his sadness. And even the famous chef Ferrán Adriá, with whom he had some controversy two years ago, has declared to be in a state of shock.
Sadly he just became grandfather last week and won't be able to enjoy his grandson. 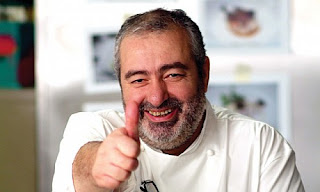