HEMINGWAY AND HIS LOVE FOR SPAIN: ERNEST DE LA MANCHA 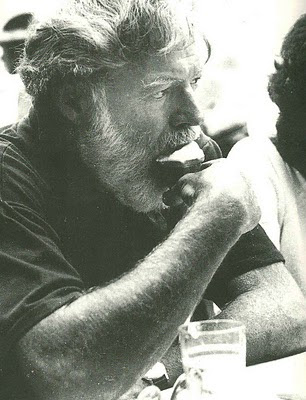 having an ice-cream in Pamplona
Few people know that Hemingway spent his final birthday in Andalucia and that it was one of the last times he would be seen happy. Few foreigners ever have been so closely identified with Spain as is Ernest Hemingway. A Nobel and Pulitzer prize-winning novelist, essayist, and war correspondent, Hemingway was able to capture the many complexities of Spain in a way that enchanted the world. His relationship to Spain was more than that of the casual tourist or even of the detached observer, Hemingway wholeheartedly celebrated all that was Spanish culture and lifestyle.
Nicknamed “Papa” by all those who knew him well, Ernest Miller Hemingway was never one to watch life pass him by; he lived it to the fullest. Born near Chicago on 21 July, 1899, much of his early years were spent in the outdoors fishing and hunting with his father, something that would remain central to his character during his life. Legendary drinker and conqueror of women, although it has to be said that indeed he had four wives, it was they who always conquered him and who dragged him to the marriage and curiously, he never married women whom truly he loved, which indicates this degree of shyness and insecurity that dominated him, even with women (apparently, he had not too a happy childhood with an overbearing mother and a weak father who also committed suicide).
And even though it is true he was an alcoholic, the reality is that his external image of arrogance hid indeed a great spiritual emptiness, a great insecurity and above all, hid his fear of death (Hemingway was unable to sleep with the lights off). It was him who said: "The courage is not more than a headlong rush."
When Hemingway traveled to Spain it was just like if you would go to your own home, for Spain was for him more than a friendly country, was the place that served him as inspiration, enlightenment and even purification. He liked the individualistic nature and the natural rebelliousness of the Spaniards, he liked the sarcasm and wisdom of the language of the people. And although he had fondness and admiration for other European countries like France and Italy, his true and emotional choice, even mystical attraction had always been to Spain, "the country he loved after his", as he always said and wrote. 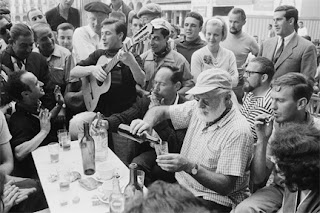 with friends in Pamplona
Since very little you could see his love of Spain, when he was at the school he conducted a school newspaper, publishing numerous articles with the name of “Ernest de la Mancha” (Don Quijote de la Mancha was the famous book written by Miguel de Cervantes).
In 1920, he moved to Toronto, Canada and started his first writing job with The Toronto Star, finally becoming their foreign correspondent. He then moved to Paris with his first wife, Hadley Richardson, joining a loosely-affiliated group of American expatriates that collectively became known as The Lost Generation. It was here that he met the writers John Dos Passos, F. Scott Fitzgerald, and Gertrude Stein. It was Stein who convinced him to turn his back on journalism and devote his talents to fiction and in fact, he first travelled to Spain in 1923 to experience bullfighting, acting on the advice of Gertrude Stein. He published The Sun Also Rises in 1926, which became a best-seller, ensuring his financial freedom for the rest of his life. 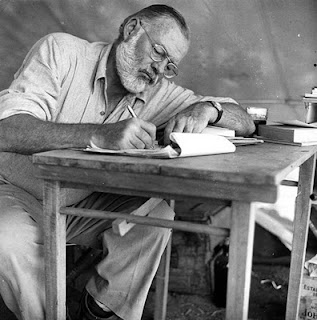 Hemingway returned to Spain many times just to watch numerous corridas (bullfights). However, in 1937 he returned as a correspondent to cover the Spanish Civil War. Hemingway was a staunch supporter of the Republican troops during the war and often put himself in danger doing what he could to support his side. These Spanish experiences served as the fodder for numerous short stories and also for the novel, For Whom the Bell Tolls, which was published in 1940. During his coverage of the war, he traveled with a fellow reporter named Martha Gellhorn. The two had first met in Key West and became close during their time in Spain. The two would later marry in 1940, after Hemingway’s second marriage with Pauline ended. Precisely there is a film about to be made, relating the fascinating story about the trip to Spain by Ernest Heminway and Martha Gellhorn during the Spanish Civil War. Starring British actor Clive Owen and Nicole Kidman, which will recount the tempestuous romance between writer Hemingway and celebrated war correspondent Gellhorn, who, by the way, was the only woman ever to ask Hemingway for a divorce. (The film, entitled “Hemingway & Gellhorn”, will be produced by James Gandolfini and is due to be released next year). 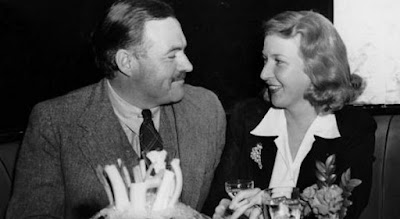 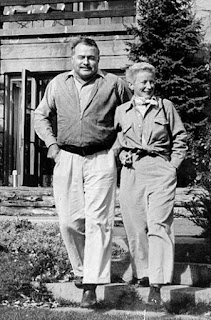 with 4th wife Mary Welsh
When in 1939 the Republican side lost the civil war he left Spain again, like any other exiled, not returning to this country in fifteen years. He had promised not to return as a Republican fighter would be in jail and so he did.
But why he was so attracted to bullfighting, of which he became a great connoisseur? According to his friend and biographer Jose Luis Castillo-Puche, not because of the morbidity and violence of the spectacle in itself, but by the feeling of immortality of the bullfighter experience in the middle of a chore.
Hemingway developed a especial fondness for two Spanish cities: Pamplona and Madrid. In fact, the last one came to be called in one of his stories "capital of the world", such was his love for the city. And when he was here he moved between the Museo del Prado, Santa Ana Square, in the Cerveceria Alemana (German Bar, a meeting place for bullfighters) and the Beef Restaurant Alley (not open any more) where he ate daily Spanish dishes with Navarre wine. 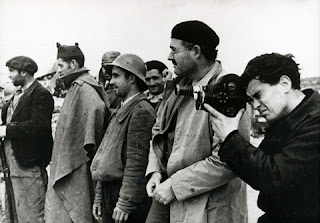 in Madrid
In Madrid, he loved to escape through the back door of the Hotel Suecia, where he used to stay, to sneak journalists awaiting him, and went to visit the Museo del Prado, dragged by Goya painting. He loved the characteristics of Madrileña people, their sense of honor, sympathy, individualism, citizenship and also their love of freedom ...
In 1952 he published what would be the great jewel of his work "The Old Man and the Sea". 1953 he was awarded with Pulitzer Prize and returned to Spain after 15 years away. And in 1954 he was awarded with the Nobel Prize for Literature. 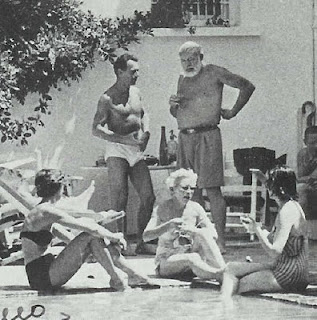 Poolside at La Consula, Malaga, Spain,
the morning of his 60th birthday, 1959
1959 would be his great year in Spain, the year of "The dangerous summer," a series of reports that he would write for Life magazine, about the rivalry in the sand of the two great bullfighters of that moment: Antonio Ordonez and Luis Miguel Dominguin, but at the same time, this also would be the coup the grace for his health, physically and mentally, because during that summer he would travel with the two bullfighters to the major bullrings, giving himself to all the excesses (in spite of his doctor's recommendations, because of his already fragile health) . In 1960, his mental and physical problems got worse and he left Spain for the last time and shortly after he was admitted to the May Clinic in Minnesota under his doctor’s name to keep his illness to be secret, he was already a destroyed man. 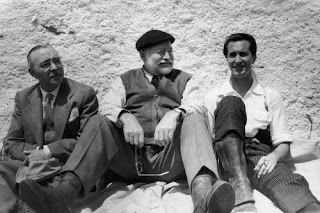 with bullfighter Luis Miguel Dominguin
And in 1961, after two failed suicide attempts and several entrances and exits of the May Clinic in the morning of July 2 (and having bought tickets to go to the San Fermin festival of that year) he shooted in the mouth with his dearest rifle and on July 7th (just when Sanfermines bullfighting was starting) he was buried in the Catholic cemetery in Ketchum. On July 11 it would be held in the church of San Fermin a Mass for his eternal rest, wich was attended by all his good Spanish friends and a good American friend of him and also great lover of Spain, Orson Welles.
That day died one of the undisputed icons of 20th-century literature. 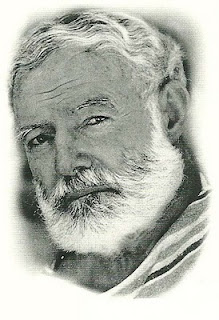