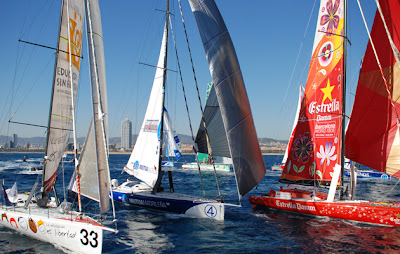 Last 31st December 15 yachts set sail from the port of Barcelona in the round the world Barcelona World Race 2010-2011, which is the second edition of an excitingly mad race that takes place every four years. Absolutely unique it is the only round the world yacht race that is double-handed (two co-skippers per boat) in which no external assistance is permitted or there is a penalty.
The race is organized by the Fundació Navegació Oceánica in Barcelona and the arrival is estimated for the end of March 2011, as well in Barcelona, with three different points of passage at the three Cape (Good Hope, Leeuwin, Horn) and the Cook Strait. 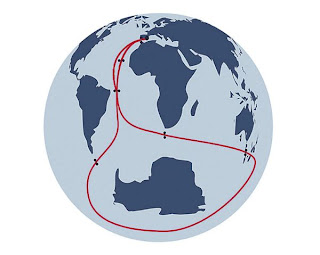 The length of the course is about 25.000 nautical miles or for non-sailing minds, 46.300 kms. There are 15 teams, 6 more than in 2007 edition. All of the participant teams are:
- Central Lechera Asturiana
- Estrella Damm
- ESP 45
- Foncia
- Forum Maritim Catala
- Fruit
- Gaes Centros Auditivos (this Spanish-British team is female 100% .... Come on girls!!)
- Groupe Bel
- Hugo Boss (Alex Thompson, the British member of the team, had to be replaced by a substitute two days before starting the race, because of an urgent appendix operation)
- Mirabaud (this team is a couple partner in real life too, out of curiosity).
- Neutrogena Formula Norueg
- President
- Renault
- Virbac-Paprec
- We are water
Half the teams are Spanish, there are also 4 French teams and the rest are mixed teams from different countries.
The progression of the competitors in the race can be followed on the official web site, in this link: BARCELONA WORLD RACE website.
As well as the official website, you can also download the race podcasts with the audio content from the video conferences and the different communication between the boats. And besides, the Barcelona World Race will be present on all the major social network sites, as Facebook, Twitter or YouTube.
It will be quite exciting to keep following them! 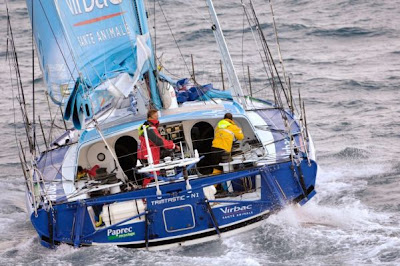