Recently Spain's Prado Museum has revealed a replica of Leonardo da Vinci's Mona Lisa, also known as "La Gioconda'', describing it as the most important known copy of the iconic painting. The discovery of the "twin sister" of "La Gioconda'' (came to light February 1st) was "a real revelation", said Gabriele Finaldi, a Prado deputy director responsible for restoration and investigation.
The replica had been at the Madrid museum for years, but it had been merely regarded as just another copy of the Mona Lisa, which da Vinci painted sometime between 1503 and 1506.
Experts began to restore it in order to lend it for an exhibition at the Louvre in Paris, which has the original Mona Lisa and it was then when they made the breathtaking discovery, hidden beneath black overpaint while in the Louvre’s original, Mona Lisa’s face is obscured by old, cracked varnish, making her appear almost middle aged, in the recently restored Prado's copy we see her as she would have looked at the time, as a ravishing young woman in her early 20s.
The Mona Lisa at the Prado in Madrid was thought to be just another fine copy, with added eyebrows and an odd black background. But curators at Spain's national art museum on Wednesday announced a startling discovery: the painting was actually executed by one of Leonardo da Vinci’s key pupils (probably Francesco Melzi), at his workshop at Florence, working alongside the master.
The artist who made the copy repeated all of da Vinci's original corrections, repainting the outlines of the Mona Lisa's waist and head, the position of her fingers, and making changes to her cheeks and neck.
The replica gives keys into how da Vinci created the Mona Lisa and into his working methods generally, restorer Ana Gonzalez Mozo said. She described the "twin" as "the most important version of La Gioconda known until now."
The Mona Lisa is widely believed to be a portrait of Lisa Gherardini, a Florentine merchant's wife, and the copy makes her look younger and more seductive. Miguel Falomir, chief conservator for renaissance painting, said, "When the X-ray revealed the landscape, it was in extraordinary condition. It was the most surprising thing in the 14 years I've been here." It has belonged to the museum at least since 1666, first as part of the royal collection and then as a state treasure. The black background behind the female figure had been added on top of a Tuscan landscape identical to that in da Vinci's original.
La Gioconda is definitely one of the most popular paintings worldwide and one of the works of art that has inspired the greatest number of artists over the centuries, from those who tried to copy its enigmatic smile to classic pop-art versions, to famous Salvador Dali's Self Portrait as the Mona Lisa. Here you are a handful of Mona Lisa versions:
﻿

Mona Lisa's earliest copy will be lent to the Louvre at the end of March as an addition to the exhibition Leonardo’s Last Masterpiece: The Sainte Anne (29 March-25 June).
Last Saturday I could see the painting, after waiting for nearly an hour in a long queue and it was quite difficult to watch it properly, because there were so many people staring at it, but finally I was lucky enough to watch it and have the chance to compare it with a copy of the Gioconda painted by da Vinci, that was hanging nearby. And there were, at least, three big differences that catch my attention: the painting colour, the model's smile and the model's age. The colour of the painting is much stronger at the Prado's Gioconda (which I found more attractive than the dark colours on the Leonardo's Mona Lisa), the smile in the Louvre's Gioconda is more enigmatic and related to the age, the Prado's Gioconda seems to be younger. Anyway  you can see by yourself and tell the differences looking at both paintings below, do you want to try? 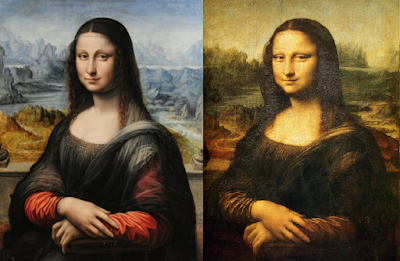 Really, is this painting ever going to stop surprising us?
Source:
The Independent
Stripes.com
Published by Nieves