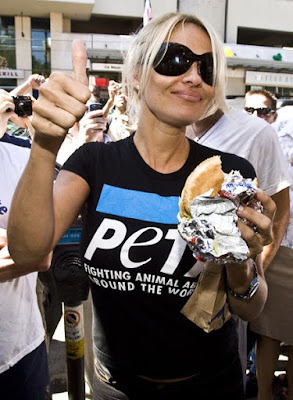 Pamela Anderson,  who is that exuberant actress who became known in the 90s TV series The Baywatch, is a regular contributor and supporter to the association  PETA (People for the Ethical Treatment of Animals) leading campaigns against seal hunt, against cruelty and abuse of chickens by KFC, against wearing furs and now she has used her participation in the American TV program  "Dancing with the Stars" last week, to show her opposition to the bullfights by means of a dance traditionally associated with bullfighting: el pasodoble.
For her performance she had as a special teacher to Charo Baeza, who was the last wife of Xavier Cugat (the American bandleader from Catalonia) and who is also another regular contributor to PETA.
Charo Baeza has taught Pamela Anderson the steps and proper attitudes to dance flamenco and in her performance she plays a young Spanish woman who falls for a bullfighter but waived his love, to continue defending the rights of the bulls. Sweet ¿isn't it?
Now I will post the video of this story, in case you are curious to see it, it seems that the actress's performance was very well received on the jury. And finally I will tell you a funny thing about Charo Baeza and it is that she has adopted a bull (¡¡!!), called "Manolo" (a very Spanish name indeed!).